Earth Day - A Day to Make a Change

Earth Day has been celebrated for the past 46 years, gaining more and more popularity. 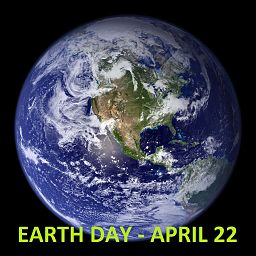 Earth day was founded by Gaylord Nelson, a US Senator, who was a witness of the ravages in the 1969, caused by the massive oil spill in Santa Barbara, California. Furthermore slurping leaded gas with huge V8 sedans in the States and the smoke and sludge polluting the air had little if none legal consequences. Even worse, those were commonly accepted as the “smell of prosperity”. For the previous to 1969 ten years there were some activists for the environment, even Rachel Carson’s “Silent Spring” became a bestseller, but yet the efforts were individual and the wide public was not aware of the pollution consequences and how to live a more sustainable life.

So it all started in the United States as a campaign in the primary and secondary schools, colleges and universities that brought about 20 million Americans for a peaceful demonstration for the environment reform. “Peaceful” is emphasized, because it was the time when many were opposing the military decisions of the American government. That lead to combining the two ideas - that of environmental care and that of peace. Throughout these 46 years of celebration Earth day became the largest secular holiday in the world, engaging almost 200 countries and millions of people. Many activities have been performed, lows written, politicians committed to the cause and many more are to come.

That’s exactly what’s up for this year’s Earth Day. Last year a conference was held in Paris to achieve an agreement on actions to be taken in prevention of the issue of Climate Change. Representatives of 195 countries participated in drafting a framework of the UNFCCC (United Nations Framework Convention on Climate Change). The agreement is to be signed on 22 April 2016 - Earth Day in New York City!

According to the head of the Paris Conference Laurent Fabius it is an “ambitious and balanced plan” that represents a “historic turning point” in the goal of reducing Global warming. The aim of the convention includes significantly reducing the impacts and risks of climate change by keeping the increase in global average temperature well below 2 °C above pre-industrial levels and try to limit the temperature increase to 1.5 °C above pre-industrial levels. Another goal set is reducing greenhouse emissions. And the third main goal is to gain consistent finance flows towards climate-resilient development and low greenhouse emissions. It is expected that 120 countries will sign the agreement.

Additionally for the whole past year there was a great initiative of the world’s Earth Day organization - Earth Day Network. The initiative is bold and massive and presents the idea of planting 7.8 billion threes in the course of the past year till this year’s Earth Day. The number represents one tree for each human on the planet. Many countries almost reached their quote and are now preparing for the biggest planting event on Earth Day. Earth Day Network does not stop here, in their statement:

“This Earth Day and beyond, let’s make big stuff happen. Let’s plant 7.8 billion trees for the Earth. Let’s divest from fossil fuels and make cities 100% renewable. Let’s take the momentum from the Paris Climate Summit and build on it.”

The organization sets even higher goal for us to reach!

What will Tom’s Junk Collectors do for Earth Day?

Tom’s Junk Collectors takes it’s part in the environmental care all year long by making sure as much as possible of the collected waste is being recycled. We appeal to all of our employees and customers to participate in the events organized for Earth Day. There is something for everyone - whether it is planting a tree, bringing your kids to a workshop, to an arts and crafts event, consuming less energy or living your car in the garage for the day it will help the Earth.

Image: By TheOriginalSoni (Own work) [CC BY-SA 3.0], via Wikimedia Commons

"I recently treated myself with a professional removal service to take care of all my garage cluttering. I am happy..."